I’m getting a little excited I must admit, I’m very nearly at the end of semester for uni which means freedom is just around the corner, I can smell it. What will I be doing in, say, two weeks time?  I shall be FROLICKING through fields of daisies, skipping alongside Edward Cullen and throwing a magnanimous number of books in the air whilst eating fantasy for breakfast, contemporary for lunch, and a dash of horror for tea.

Ten Books I Feel Differently About After Time Has Passed

What a lovely long title we have for this week. It certainly an almost tricky topic, too. This topic can mean almost anything and for the sake of not making it too difficult for myself I’ve chosen books that I either like more, dislike now, understand differently, etc. The main problem? I really don’t reread much (I’ve reread a grand total of maybe 5 books IN MY LIFE). So this is basically going to be a list of books that I’ve thought differently about since finishing or something along those lines (rather than a childhood book that I’ve reread, which would be difficult seeing as I didn’t like to read as a child).

Harry Potter and the Deathly Hollows by J. K. Rowling

So this is one that I hate now. HA! I KID. Oh but look at your faces, that was so worth it. I can practically see you all having mini heart attacks. Ahem. Obviously, it’s quite the opposite. I have actually reread this book (obviously) and I think the more I reread it (she says as if this happens annually) the more I feel emotionally destroyed and depressed. It’s marvellous, this is why we love Harry Potter. We love repeatedly reading about our favourite characters dying horrendous deaths and being reminded that we are now an adult and not a child (well, at least only in the literal sense), *sips tea from novelty Mickey Mouse mug*.

The Chronicles of Narnia by C. S. Lewis

And goodness, yes, I mean the entire series here. This is actually my most reread series – which is odd and strange because I did not actually read them at the age you’re supposed to read them. A fun fact: the absolutely beautiful editions that I have were bought as a gift for me/my siblings but I didn’t like reading so probably broke my Mum’s heart by never touching them. Fear not, I have made up for it since and reread, in particular, The Lion, the Witch and the Wardrobe at least 3 times in the last 2 years. What do I find different? All those clever little religious undertones of the books I missed when I first read them at a young age that wasn’t quite a young age (maybe, 13?) and all these things went WOOSH over my head. But now? I guffaw at how religious involved this story is and have decided that the world would indeed be a much better place if God was, in fact, a lion. 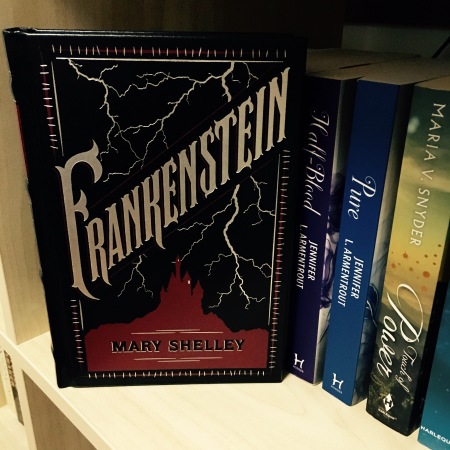 This is another of my favourite rereads. I don’t know why, but I’m about 96.3% obsessed with this story – I just love it to pieces. When I first read Frankenstein, I enjoyed it. Much more so than I ever thought I would. A lot of people slag Frankenstein off for being boring and not being able to get through the letters at the beginning. But GUYS. This book is fabulous. It blows my mind every time I revisit it how someone could write this in 1818. Think about that. It’s crazy and such a perfect horror story. And once you start pondering who actually is the monster – Victor or his creation – you’ll give yourself a headache. #StayAwayFromScienceKids.

I’ve got this one of the list as a sort of bonus book (mostly because this was a really quite difficult list to make). Why? Because I haven’t changed how I feel about Twilight one bit from when I first read it. I love Twilight and I think it’s a great vampire story – in fact, I actually really struggle to read other vampire books that aren’t Twilight. I think the movies are terribly and brutally shot down the fandom – I mean even for a little bit I was tricked into thinking I hated this series and then I had a revelation one day and realised that it was just the movies I didn’t like. I’m currently rereading this so that I can straight away read Life and Death afterwards. As a side note, this has always been one of my favourite covers.

Pride and Prejudice by Jane Austen 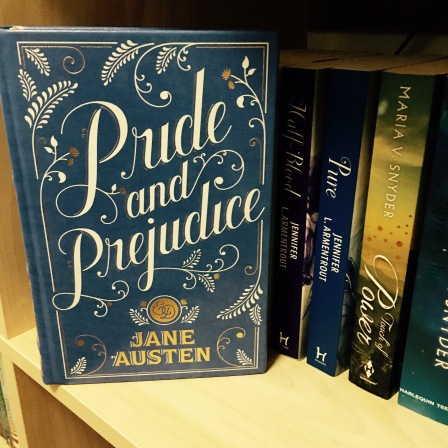 So this is a pretty major one for me. I haven’t reread this since my first reading but I’ve had a change of heart about it. I really struggled reading this when I picked it up. I had to sit myself at my study desk and prop matchsticks up on my eyes to stop myself from falling asleep (full on Mr. Bean style). I was confused and I didn’t really understand what was happening. To be perfectly honest, it majorly put me off reading other classics – because what was the point if I couldn’t understand them? But I have read others since and enjoyed them plenty so obviously this wasn’t true and I don’t understand why I struggled so much with this one. HOWEVER. I’m still 100% in love with the story having avidly watched the Kiera Knightly film adaptation of it more times than is probably healthy for me. And Mr. Darcy is possibly the weirdest, most rude, hoighty-toighty fictional character I’ve ever come to love. I think I’m really due a reread for this one.

The Hunger Games by Suzanne Collins

I can feel your gazes landing heavily upon me, because you know what’s coming. My opinion of The Hunger Games has somewhat lowered over the years since having read it. I found it irritably addictive when I first read it, but I didn’t like the ending. And the movies were good but for some reason I always find myself thinking negatively of this series. I genuinely don’t understand why – I don’t ‘dislike’ it, but it’s never been on a favourite list and I feel so ‘meh’ about it. I think I probably need to sit myself down and gorge myself on the entire series some weekend to rediscover what it is about this series that is so good – clearly there’s something not right with me.

Simon vs The Homo Sapiens Agenda

I haven’t reread this one either but oh boy oh boy will I. The next time I have a free second I’m going to sit down and read this until the pages fall out. So what changed? I enjoyed this book a lot when I read it, but I’ve found since then my love of the story has grown exponentially to the point where I shriek at seeing someone else reading it. I love this book so much it terrifies me – how do these things happen?

This series is certainly an interesting one. It’s got quite the wrap, but I think we’re all secretly reading this under our covers at night desperate to know what happens next. I found myself in a somewhat confused state when I finished the first book. I wasn’t impressed, per se, but I was quite intrigued with continuing. It’s so fluffy and almost rubbish that I just couldn’t put the stupid thing down – and now I’m finding as I continue through the series I’m just loving it more and more. Which is also a little worrying. 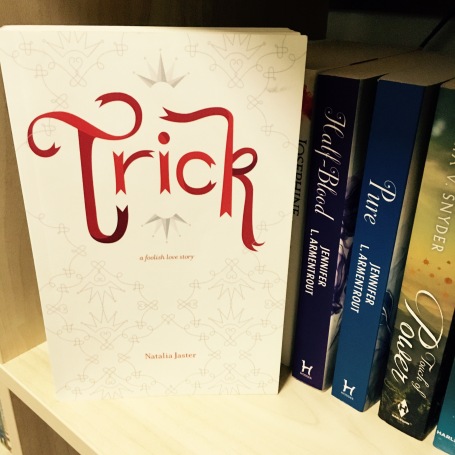 This is definitely one of my more recent reads. If you haven’t heard of this then excuse me whilst I THROW IT AT YOUR FACE. It’s excellent. It’s unexpectedly steamy. And it’s fun. When I first finished this I thought, well that was jolly good. But this is another book that I’ve slowly become more obsessed about as time has passed. I keep finding myself wanting to read it again and – more importantly – to read the rest of Jaster’s books. I can’t recommend this book enough – and just look at that cover.

Hands up if you haven’t heard of this one? Mhm, thought so. Jemisin, I think, is one of those names that you don’t see around until you dive full face into the fantasy genre and suddenly her books start bobbing up everywhere. I think this book is about as high as fantasy can get – everything is reimagined. Which made it a difficult read and slow progress. I definitely enjoyed this story but I’ve found as time has passed I’ve forgotten what happened and been less than inclined to pick up book two, which was an unexpected reaction. I think I might steel myself to reread this book and then dive straight into the second one to get things rolling again. I’m pretty sure I should be in love with this series, *stares confusedly at bookshelf*.

And there we have it. Another list done. I certainly think it’s interesting how your opinions on books can vary so much sometimes within such a small space of time. I think it’s such a shame when for no apparent reason you slowly start sinking into a negative thought process for the book. It’s worrying to say the least.

What’s a book you find yourself liking less despite not having reread it?

27 thoughts on “Top Ten Tuesday: The Passing of Time”