Hello one and all. Today I bring to you an exciting post about a book that is being released today! The Jakkattu Vector is a science-fiction novel that is set on a world that’s not doing quite so great. Well, our world. Earth is dying and with alien invaders arriving let’s just say a dust storm is about to kick up. I know I’ve already got myself ready to settle down with this book and jump into its world!

Excitingly, I have some extra material to bring to you today in the form of an author interview and an excerpt! Have a read, get to know Tyler, and then head over to the blog tour home and enter yourself into a competition to win a copy of this book. You know you can’t resist the free offer of a book, don’t deny it. I will provide all the links to that jazz down below.

You’re the head of marketing for Novel Publicity, a business woman, and an award winning author. What does a typical day work day look like for you?

How do you find balance between working life, your family and everything else?

P.K.: Have a forgiving spouse?  I don’t do everything, I can’t. It’s just not possible.  Thank god for a man who loves to cook and clean!  My kids are getting older now so they need less of my focus and more of my driving skills, so I do a lot of reading in the car waiting for them.  I don’t know how to organize it, I kind of just do it.  I’m really walking talking chaos so I’m the wrong person to give advice on this.

Have any tips for those of us that work from home?

P.K.: I’d say the most important thing is to accept that you can’t do it all and not only is that okay, it’s normal and good. 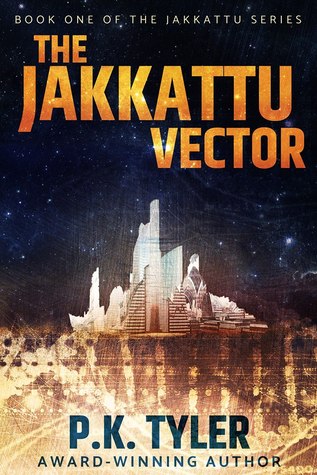 They came as saviors to a deteriorating Earth

Julip Thorne questions whether there is more to life beyond the barren dirt, acidic seas, and toxstorms her people work and die in. Living in poverty on the withering Greenland Human Reservation, she wonders if the alien Mezna goddesses are truly as holy as the temple preaches. Julip begins to dig deeper into the history of the planet and her leaders’ rise to power. But nothing can prepare her for the atrocities she uncovers.

Meanwhile, Jakkattu prisoner Sabaal suffers constant torture and heinous medical experiments as her Mezna-priest captors seek to unlock the key to her genetic makeup. Escaping from captivity, she finds herself suddenly alone on the hostile alien planet of Earth. To survive, she’s forced to work with the same Mezna-human hybrids she’s loathed her entire life, but the more they work together, the more they realize that their enemy is the same.

When humans and Mezna collide, will Sabaal turn out to be the genetic vector the Mezna have been searching for all along, or will she spark the flame that sets a revolution ablaze?

IT STARTED TO RAIN AS they walked, but Norwood kept an impossible pace. Julip slipped and fell more than once, but he just kept going. She guessed he was right to hurry; they had to get back before nightfall so they didn’t get caught. Ma would be furious as it was, what with them gone missing for so much of the day.

The sky darkened despite it still being midday, and clouds rolled in behind them. Back home it would be a mess. Rain put everyone in a sour mood. The sea was too volatile to risk going out when it stormed, and while the rainwater was clean and safe, the ocean steeped in chemicals that could peel a person’s skin before too long. Their father had burning water scars up and down his arms and speckled across his face from working as a jellyfisher for so long. By comparison to other men who worked the sea, he had remained pretty intact.

The Cotillion was probably having a great time. Rain meant clean air and fresh water, for a little while at least. Sometimes if the rain came at the same time as a toxstorm, it would bring the fumes down to Earth, keeping everyone inside for days, sometimes weeks. The last time that happened, Julip had been nine and was forced to stay in her parents’ dwell with no one but her brother for nineteen straight days. The damage the fumes caused still marred the walls of the bedroom they shared.

The siblings had complained, begged to be allowed outside, but nothing they said or did would convince the adults to let them go. Only her father ventured out to pick up a daily ration of food and water from the Center-of-It-All. He would bundle up, covered from head to toe in fabric and plastic. Even his head was wrapped in one of her mother’s scarves, and his eyes hid behind goggles he’d made out of extra window plastic.

Thirteen people died during that storm, and two more were blinded. For months after, there was a rash of stillbirths on the reservation. The Daughters all agreed that the fumes had come down and poisoned the babes. It’d been five years since the last bad toxstorm whipped through Greenland, so one was due to come soon. Julip loved the cool rain as it soaked through her scarf. She uncovered her head and felt the water trickle down her face and saturate her hair. Parents would take the littlest kids on the rez outside, strip them, and scrub them red. Clean rain meant a real washing, not a quick, timed wipe-down with the gray water from the sinks.

Norwood pulled a canteen from his trouser pocket and caught drips of water from the oversized leaves surrounding them. The trees weren’t much taller than him, but the forest canopy closed in as they walked. Soon they walked on dry earth, and the only remaining evidence of the rain was the heaviness of her hair and the sound of water dripping on leaves high above.

“I’ve never been deep in the Wilds,” she said.

“Ya’ve never been shallow in the Wilds.”

“True, but there ain’t even words for this back home. It smells different, dirty, but my nose ain’t pained by it.”

“‘Cause it’s real. This dirt is from the Earth, not the toxes.”

“Why do we have so much tox on the rez if this is right here?”

“I dunno, but I reckon it’s ‘cause we’re human. People made the toxes. In some way, I guess it’s only right we live in ‘em.”

A howl rose from deep in the forest, and Julip yelped and bent down, trying to blend in, hide in the underbrush. Her legs wanted to give out, but she squeezed her eyes shut and demanded her body not betray her.

P.K. Tyler is the author of Speculative Fiction and other Genre Bending novels. She’s also published works as Pavarti K. Tyler and had projects appear on the USA TODAY Bestseller’s List.

“Tyler is essentially the indie scene’s Margaret Atwood; she incorporates sci-fi elements into her novels, which deal with topics such as spirituality, gender, sexuality and power dynamics.” – IndieReader

Pav attended Smith College and graduated with a degree in Theatre. She lived in New York, where she worked as a Dramaturge, Assistant Director and Production Manager on productions both on and off-Broadway. Later, Pavarti went to work in the finance industry for several international law firms. Now located in Baltimore Maryland, she lives with her husband, two daughters and two terrible dogs. When not penning science fiction books and other speculative fiction novels, she twists her mind by writing horror and erotica.

TAKE ME TO THE GIVEAWAY!