Oh Adornetto, you wicked, wicked woman. CLIFF HANGERS. Cliff hangers everywhere. That book was so good in so many ways. I love how often I was surprised with how much I was enjoying things – and how things always end up being more serious or dramatic than you first anticipated. Omg, I’m just loving this series so much. Excuse me whilst I don’t sleep as I reach for book three . . .

I really enjoyed this as a sequel to Halo. This series has to be one of my favourites for its awesome representation of Heaven and Hell. It also has some really interesting character and the story itself was fabulous. If you’re a fan of fantasy or books with angels in them then I definitely recommend checking this series out. If you’re not sure whether to continue the series then I highly recommend that you do! Now, if you haven’t read Halo (book one) yet then leave now or be spoiled.

Where Book Two Takes Us

After the explosive events of book one, we dive back into trouble again and get to see the underworld. Mr Jake No-Good is back and is up to his tricks, but this time he’s managed to kidnap Beth into Hell. This, of course, causes a few problem. It’s up to her to stay strong and keep away from the weirdly possessive Jake and wait for her rescuers to sort out a plan.

This is a situation that has just about never happened before which obviously poses some pretty serious challenges for Ivy and Gabriel – oh, and of course Xavier. And they’re under the pump because Jake, still obsessed with the idea that Beth is his soul mate, wants to keep her forever and make her he is queen, *shudders*. It’s safe to say that this was actually my favourite book in the series (At the time of writing this I’ve already read book 3, Heaven). 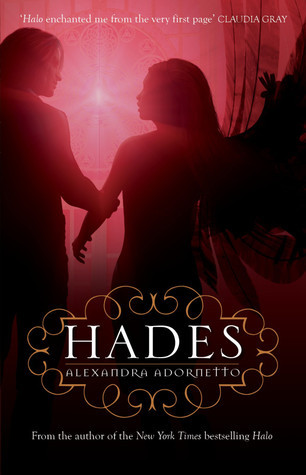 The way that Adornetto has created this representation of Hell is incredibly clever. It’s so weirdly accurate of everything that you imagine it to be. There are plenty of clubs where people spend eternity doing all the bad things and all the people we see in these clubs are horrible, rude, lecherous, and just generally the type of person you’d avoid. There are so many other clever things – such as making all the characters there highly self-centred. In a normal situation you hope the the person will come through fairly on their promise – but obviously that won’t be the case here. There is even a ‘vomitorium’ in restaurants so that people can be as glutinous as they want without the ‘problem’ of becoming full. Lots of other things altogether made for a really compelling and believable representation of hell.

One of the other interesting things was the presence of characters who have literally sold their soul to the devil for one reason or another and so are stuck as servants. It was almost a bit scary when you’re really engrossed in the story because you start imagining yourself in that situation . . . *more shuddering*. I was really impressed with how well Beth handled the situation she was in because wow, Jake literally reaches a new level of creepy here and I don’t know how these souls who’ve been serving him for decades have survived. If I was stuck with Jake for any period of time I’d be doing my best to act cool but be so incredibly on edge that I would karate chop someone for breathing out of place.

My favourite thing about this book, though, was the clever way that Adornetto was still able to incorporate all the main characters. Seeing as Beth is stuck in Hell and separated form the others, and the whole book is form her perspective, you’d think things would start to get a bit boring – but NOPE. Without actually telling you how it’s done, Beth is able to see what the others are up to – so we, as readers, are still able to follow their storyline and get some variation of narrative within the book. Although, it also makes things very frustrating because sometimes I really just wanted to yell at the silly wardrobes and say SHE’S RIGHT THERE. I’M RIGHT HERE. GUYS. WHAT ARE YOU DOING. Because this book will make you into a crazed lunatic with the stress of having to watch the others flail about.

Beth has been a bit of a rocky character for me. I’ve been unsure as to whether I like her or not. Because she’s an angel, she has a certain level of naïveté which I often find frustrating. However, she was much stronger in this book, I thought. Overall, I found her a lot more ‘palatable’ as a character. She’s such an interesting character for the way that she is really ‘human’ for an angel and I think the struggle that she goes through internally for this is really cool.

I think that’s really all I need to say for his book. It’s definitely worth continuing on the story and you’ll almost definitely want to read the third book as well because there’s a pretty cruel cliff-hanger. I really enjoyed this and would definitely say that this is a very clever and addictive book.

Have you read Hades?

One thought on “To Hell and Back in Hades”