Legacy of the Clockwork Key by Kristin Bailey

Legacy of the Clockwork Key

Legacy of the Clockwork Key is a hidden gem! I’m a real sucker for Steampunk and this was just so much fun cover to cover. If you don’t know what Steampunk is then I would recommend googling it as I’m sure my definition will be terrible but hey ho: it’s usually a novel that takes place in the 19th century (sometimes early 20th) and has a heavy focus on mechanical machinery that has cool clogs and often lots of steel and brass. The machines are usually leaning towards the fantastical and are the perfect excuse to have a wicked adventure in an older period. Which means that it’s super cool and you end up with characters that look odd, like: 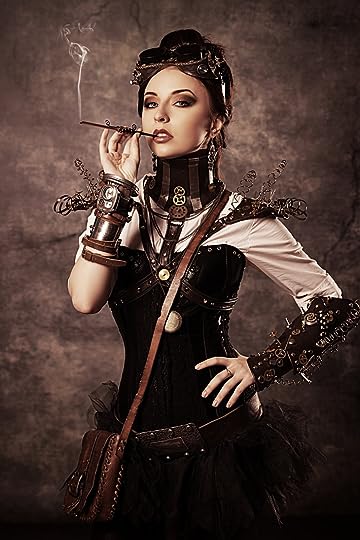 Although, Meg doesn’t look like that at all. In my mind.

LOTCK, as I’m going to call it, revolves around this mystery of a murderer and a unique key that our protagonist, Meg, owns. In a fire, she lost her family and was taken in by a man by the name of Rathford. She’s stuck in a seemingly time-locked house where she never sees Rathford but everything must remain in the same condition as the day his wife died. Meg ends up on this crazy journey accompanied by Will, a Scottish hotty (he’s MINE, ladies, back off) and it’s just terrifically awesome. Down to earth maid + Scottish grumpass = steampunk wonderland. Also, brownie points for the series’ name, “The Secret Order”, ooh, so mysterious! It’s so very accurate, I just loved how cloaked in secrecy everything was. Oh, and it’s also set in London – the ultimate Steampunk setting, and you mustn’t forget the blimps. Steampunk London is not Steampunk London sans blimps. 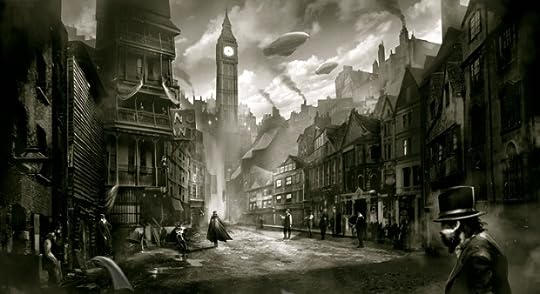 I often feel like Steampunk is a widely under-explored genre. Sure there’s a lot of fiction/fantasy that leans towards and borrows from it, but a full-blown Steampunk novel is just so much fun. The contraptions in this and the inventions were mind boggling. As a lot of the story revolves around crazy inventors, Bailey has basically given herself the green card to UNLEASH her imagination. And I commend her – it’s fabulous. This book has everything from mechanical horses to an automaton-controlled sailing boat. You name it kiddo. If you’re looking for a great dose of unique adventure, you’ve found it. And besides, if you don’t enjoy Steampunk (good Steampunk, that is) on some level then there’s something wrong with you.

It was no surprise that there was going to be some intense friction between these two. As soon as a male character was introduced I raised my eyebrows in a I-know-where-this-is-going way. I should probably pause here to say that if anyone walks up to me with a Scottish accent I will befriend them immediately. And maybe then steal them and force them to talk forever. Which may or may not stem from my love of David Tennant.

I 100% ship these two together. The friction between them is highly entertaining because they so clearly like each other but are beating around the bush. Not to mention the unspoken banter between them and Lucinda and Oliver later on.

I was going to put a really hilarious quote here, but a) I forgot to tab anything as I read, and, b) there’s a grand total of one quote on it’s Goodreads page. So . . . sorry about that, maybe just giggle anyway and we can both feel better. Ta.

Meg was a great leading lady in this story. Well-educated, she’s equipped with skills that are almost entirely useless for tackling the challenges. Nonetheless, she always puts on a brave face and meets them head on. I’m really excited to pick up the sequel to read more of her.

Will is just awesome. Okay, his Scottish-ness is awesome. But he’s a beautifully tormented character as well. He’s going through this painful silent struggle with his feelings for Meg as they’re not in the same social class and therefore “can’t” be together. Pah, silly rules. He’s a wonderful broody character (within measure) and don’t those characters always blossom into the greatest heroes? Anyway, I’m making this sound far too much like a Romance novel.

If you asked me to count off my favourite things in fiction after “J. K. Rowling’s name on the cover”, and, “Scottish men”, a gauntlet-style challenge would sit in a comfortable 3rd position. Now, strictly speaking, this is not a gauntlet, but the characters have to solve one trying segment of a challenge one after another and each poses a new threat. Once all are completed, they will supposedly reach whatever our band of characters are trying to get. There’s plenty of gasp-worthy moments and plenty of times when you’re a bit worried someone might die (or something equally dramatic). This kind of adventure is basically an automatic thumbs up for me!

If you enjoy reading Steampunk then this is another wonderful series that you’ll enjoy. The characters are lovable and, in my opinion, well developed. If you’re looking at trying some Steampunk then this is a great series to start with, you’ll love it especially if you’re a fan of YA or fantasy (or Sci-Fi). I cannot wait to get the second book and start reading that. I’m very curious to see where this series is heading! #TeamWill

Have you read LOTCK? Are you a fan of Steampunk? Let me know in the comments below!

3 thoughts on “Book Review: Legacy of the Clockwork Key”

Q. What's your favourite paranormal creature? I am absolutely LOVING what @vanessa.len_writes has done with the concept of monsters in #OnlyAMonster 😮 I have been stuck, unable to do anything but read this book over the weekend. Definitely a book to put on your must-pile for 2022 because it is so much fun. Monsters. Time travel. Escapes.⠀⠀⠀⠀⠀⠀⠀⠀⠀
Q. How do you organise your shelves? I have tried many ways over the years, but my current organisation is by genre! Which is very novel for me as I've never tried it before.
Rep post 📯 Q. What book have you been wanting to buy forever? The Paris Architect is another wishlist veteran for me - and one that finally got chosen by a family member last Christmas!! I love seeing what people pick for me each birthday and Christmas 😍⠀⠀⠀⠀⠀⠀⠀⠀⠀
Rep post 📯 Q. What's your favourite trope in dystopian books? My current obsession is climate change thrillers. Green Rising is about teenagers dealing with an Earth that is basically no longer habitable. And they're doing weird things to survive 🤨⠀⠀⠀⠀⠀⠀⠀⠀⠀
Q. What book were you most excited to be released in 2021? Defy the Night was right up there for me and LOOK I have it in my hands!! This is another addition to the tbr after Christmas and I'm so ready to read. If you don't know, this is set in a kingdom where a sickness ravages the land and only the rich can afford the cure *ooooh*
Q. Is this on your tbr? I'm PUMPED. This was released in 2018 and I've been longing to add it to my TBR ever since. It's always so exciting when people pick veterans off my wishlist and I finally get to hold the book in my hands 🥺
Rep post 📯 Q. Do you prefer female leads or male? Most of the historical fiction I read has female leads which I love 😍 I'm so excited to read Lilac Girls, it's a book I've been hyped about since it's release (in 2016!) so I really can't wait to dive in. This is WWII fiction!⠀⠀⠀⠀⠀⠀⠀⠀⠀
Q. What's a good deadly competition that you've read recently?! I'm so excited for The Inheritance Games - everyone is telling me it's giving off Squid Game vibes (have not and will not watch) so I'm intrigued!!
Rep post 📯 Q. What was the last book you treated yourself to? I went a bit wild last month, but one I really love is this edition of 1984. I somehow didn't have a copy of this, and in December I always visit one of my favourite indie bookstores to pick out a special edition - this is 2021's pick!⠀⠀⠀⠀⠀⠀⠀⠀⠀
Q. What are your reading goals this year? One of mine is learn more about climate change through books 📚 sometimes it's easy to forget that books can be more than just a story - that they can also be the greatest wealth of knowledge.
Q. Have you read this? Let's all take a moment to drool over the special edition of The Song of Achilles. I think I should make it a mission in 2022 to make sure this gets read! This book is SO pretty!
It's BOTM time! How great is the cover for the January BOTM for #TheBookStack book club?! Run by @harlequinaus (and this copy also courtesy of them 🥰), this is a great book club that is coming up with really engaging picks each month.⠀⠀⠀⠀⠀⠀⠀⠀⠀
It's time! It's the Christmas book haul!! The biggest book haul of the year 😱😱😱😱 these are all the books I got for Christmas in 2021 - an outrageous number from generous friends and family. To everyone who contributed to this immense pile, thank you so much - you know exactly how much joy this brings me ❤️📚
Q. Do you subscribe to book boxes? Which ones!? I tried out the newly revamped @novellousbox having bemoaned the end of the YA Chronicles for some time. And omg I LOVE! The team has done an epic job bringing this Aussie book box sub to life - one package quarterly of 4 books and just LOOK at the selection!⠀⠀⠀⠀⠀⠀⠀⠀⠀
Q. What were your top 5 reads for 2021? These are mine! I did want to include What the Wind Knows, but it was a different size and looked funny in the stack 😝 but these five books made my all-time favourites list this year!
How cute is this little picture book?! The Tale of the Tiny Man is a sweet story about a lonely, tiny man who befriends a dog! A great tale about finding and sharing friendship for any doggy lovers out there 😍⠀⠀⠀⠀⠀⠀⠀⠀⠀
Q. Tell me something fun you've been up to today! Christmas is spent with family for me, and witg my new nephew it's been a very special Christmas where he's been spoiled with presents! Lots of food has been eaten and plenty of time lounging about and swimming in the pool 🏊⠀⠀⠀⠀⠀⠀⠀⠀⠀
MERRY CHRISTMAS! I hope you all have a wonderful day today filled with books and reading 📚🎅🎄⠀⠀⠀⠀⠀⠀⠀⠀⠀
Q. Do you use booksleeves? I don't know where I'd be without booksleeves this day, and how cute is this one!? This was day eleven of the @restrelax1 advent box and nothing makes me happier than a booksleeve 😍⠀⠀⠀⠀⠀⠀⠀⠀⠀
Q. Tell me some of your reading goals for 2022! I have so many 😲 one of them is to reread more old favourites like the Tiger's Curse series 😍 I'll be revamping my TBR jar system to fit in my new challenges so keel your eyes peeled 👀⠀⠀⠀⠀⠀⠀⠀⠀⠀