This was a really nice conclusion to the trilogy. Overall I really enjoyed the journey that we went on with Beth and Xavier and I think these are great, quick reads. I wasn’t quite as blown away as I was hoping to be but I still think Adornetto’s representations of Heaven and Hell were really awesome. I really enjoyed her writing style and I’m definitely keen to give some of her other books a go now!

*If you haven’t read Hades then DON’T READ THIS as you’ll get spoiled!*

I really enjoyed book two, Hades, but I’ve got to admit the whole marriage thing took me by surprise. I wasn’t sure how I felt with them being so young (although I suppose 19 isn’t actually that bad, I’m just still thinking of them as 17) – it felt just a bit odd. But I was able to reconcile this with the fact that they are in a pretty unique situation and because of Beth being an angel who might possible return to heaven any day, it did make sense. So there was that. But the best thing about picking this book up is that it started right from where we left off in the previous book – so there was no dilly dallying through several chapters of ‘fill in’, nope. The transition between the books was delightfully seamless.

After the super awesomeness of the previous book I did have my doubts about this one. I wasn’t sure how everything was going to wrap up and the sudden ‘maturity’ of the characters had me concerned. But I think Adornetto did a really good job of finishing off the story and making everything as logical as it could be. There were definitely times throughout this book when I began to wonder whether I was still enjoying the story as much as I had been, but almost as soon as I had those thoughts something would happen that would have me spilling my tea as I failed to bring it to my lips. The bottom line is that I just get so excited thinking about how clever Adornetto’s representations of everything were.

In the previous book, Beth has literally been dragged to hell and back and her unwavering love for Xavier has pulled them through some very tough times. However, their decision to get married to prove to the world and heaven how much they love each other and the lengths they will go to to be together causes them more trouble than they bargained for. Heaven is unhappy – it is forbidden for an angel and a human to get married and so a supernatural group called the Sevens are set after them. The problem is that they’re not quite obeying by Heaven’s rules and so Beth, Xavier, Ivy, and Gabriel are on the run once again in their plight to be together.

What I Really Liked

I loved how well all the storylines from the series were brought together in this conclusion. But namely, I loved the Sevens. I mean, they were horrible, but seriously cool. I don’t think I’ve ever read about them before but the idea of this group of honestly terrifying creatures running across the earth to restore balance by hunting down the troublesome individuals was SO. COOL. I think someone could really have some fun going to town on recreating their image from this book. They gave me the same sort of chills that the Silence, from Doctor Who, did. *shudders*.

The other thing that I really liked in this book was Molly’s presence. Whilst she’s not quite there as much as in the previous book – I really liked how she provided just a bit of outside support for Beth and Xavier just through the fact that she knows what they are and about their world. I also thought her little story that sidled up against the main events was wonderfully terrifying.

The absolute best thing about this series was the fact that there was NO EPILOGUE. I am often so let down by books that feel the need to finish stories off with by jumping 5, 10, or 20 years into the future to let us know how things turned out. WHY IS THIS? I love that this simply finishes the story at the appropriate moment and that’s that. We can use our own imaginations to let the characters live on if need be (although, not in a Lauren Oliver sense, *traumatised flashback to Before I Fall*) – the only way I can compare this, is to The Martian (Andy Weir) where the book just blissfully finishes at exactly the moment it needed to. None of this rubbish that we got in the movie adaptation where they tacked on a pointless epilogue. *exasperated sigh*. 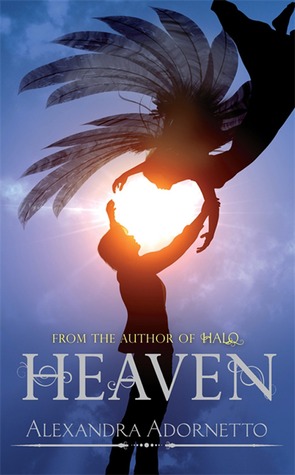 I began to like Beth less and less as I went through this book. She seemed a little petulant and annoyed me more often than not. Whilst by the end of the book I was ‘okay’ with her, for a large portion of the book she frustrated me and I wish she could have been a little less hotheaded and thought a couple more things through.

That being said, her utter devotion to Xavier was awesome and I loved how Adornetto distracts us from certain things occurring that involved Xavier by loading 90% of the tension and focus around her instead. I feel like whilst the story seems to be told from Beth in hindsight (I’m not sure if it’s meant that way but she makes ‘comments’ at the end of some chapters that indicate that she’s actually recounting these events to the reader) we’re actually seeing her through the eyes of others, like Ivy and Gabriel, and are able to judge her in her naiveté in that sense. That probably sounds ridiculously confusing – and to be honest, it is a little muddling to read. I’m not sure how I’m supposed to feel about Beth throughout the series but let’s put it this way, she’s no Katniss or Celaena.

Xavier was, as always, wonderful. He has a really tough time in this book with everything that he has to deal with and I loved his undying love for Beth and the measures that he was willing to go to. He’s definitely still one of my favourite fictional male characters but he doesn’t quite compare to Ren (Tiger’s Curse), Ash (Iron King), or Loki (Switched). Then again, I don’t think anyone ever will.

It was pretty brutal for him in this book with how much of his life gets effectively taken away from him. What with marrying at the age of 19, having to run away from home without telling your family because of the supernatural forces chasing you, being forced to drop out of college and waving your future goodbye. Like, sheesh. Tough luck or what? Adornetto definitely plays with our feelings throughout this book in regard to Xavier – but one thing I must say is PRAISE THE LORD FOR NO LOVE TRIANGLE. Can you even remember the last time you read something that didn’t have a love triangle in it, hmm? It was definitely a nice relief.

What I Was Disappointed About

Unfortunately, there were quite a few things that I was disappointed that this book didn’t address. I was really hoping that this series would finish with a bang and tie up all the lose endings – but it didn’t quite manage to do that.

1) Firstly, my biggest disappointment was that we don’t find out what exactly Beth can do with her powers. I mean, in the first book we discover that she has the ‘most powerful’ gift of love. She literally sends a fallen angel back to Hell with her blindingly awesome powers. But then she just about doesn’t use it again. For so much of this book she seemed to put herself down and say she had no powers or really weak powers, but GIRL. You clearly do have some awesome things up your sleeve. And let’s not mention the whole fire thing that happens in this book. So I was really disappointed when these didn’t manifest.

2) The next thing was something that I didn’t really think about until after I finished the book, and that was Gabriel and Molly’s ‘relationship’. For the entire series Molly has been trying her best to capture Gabriel’s attention – and it seemed to be working. You could practically here the pieces of his resolve crumbling to the floor in the last book. And things certainly take a fleeting moment of an interesting turn in this book. There was zero conclusion for that little dilemma and it bothers me to not know exactly what it was all about.

3) Too much running away. 87% of this book is Beth and Xavier fleeing from impending doom. Whilst this gave a wonderful atmosphere of OH SHIT, and also exhaustion, I was really hoping for a better stand-off than what we got. I felt a lot of the things in this book lacked a bit of oomph.

I really, really enjoyed reading this series. I thought it was really unique and I’m pleased that I gave it a go. I thoroughly enjoyed the storyline and the interesting places that the books take us – however I was just a teeny tiny bit let down by the way things wrapped up. The main thing that bothers me that I quickly wanted to mention, was other people slamming this series and blaming it on the fact that she wrote it when she was young. I find that to be a frustratingly poor reason and excuse to critics someone’s work for – so I urge you not to listen to that and to make your own mind up. A story can be good regardless of whether it’s written by a 5 year old or a 90 year old. Nonetheless, I’m eager to read more of Adornetto’s work because, as I’ve said, I adore her writing style and I think she has some wonderful ideas and a fantastic ability to get them down on a page. It is definitely worth finishing this series off – despite its flaws we get all the closure we need.

Have you read Heaven?

One thought on “Head Stuck in the Clouds in Heaven”