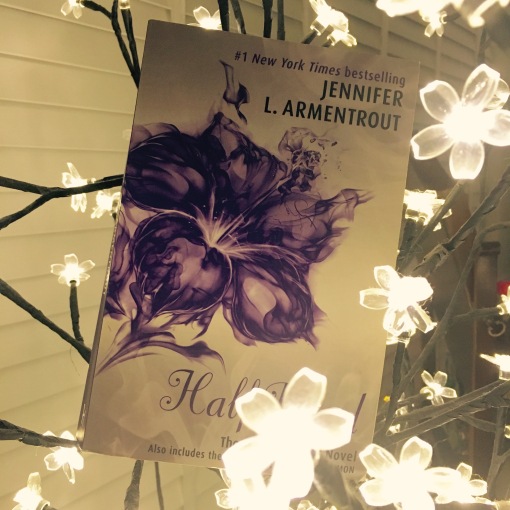 Amaaaazing. How have I not read Armentrout before this?! This book was so good and enjoyable and oh my goodness Aiden. I can’t decide how I feel about Seth yet – I just really want to read the next one! All the fighting and abilities were really cool, I hope we get to see more of what the Pures can do in next book. Just the whole concept of the world was awesome. So much yes for this book!!

This book sort of BLEW. ME. AWAY. with how much I enjoyed it. I’d heard of Armentrout plenty prior to reading Half-Blood but I wasn’t entirely convinced that I would find her books a stella read. I WAS WRONG. I was so wrong. About a year ago I drifted into a quaint little book shop which had a minimal selection books – if you weren’t looking for Twilight, Harry Potter, or Di Morrissey then you’d have to be prepared to roll up your sleeves and rummage. And so I did. The weird purple-gray colour scheme of the cover caught my eye and I’m so glad it did. This book, this book is just yes.

But What’s it Actually About?

Half-Blood is the story of Alex (Alexandria) who is a half-blood and on the run in the mortal world with her mum. Or at least she was until a daimon killed her mum. She’s taken back to the Covenant where she came from (it’s a sort of crazy military school for people who are descended from the gods) where she’s given a second chance at staying and graduating. For a half-blood, life’s options are pretty limited, but becoming a daimon hunter is an option – and that’s what Alex wants to do. She wants to avenge her mum’s death. She’s a very feisty character, but underneath all those prickles she’s vulnerable; her mum is dead, she doesn’t actually know why they left in the first place, and she’s crushing real bad on a pure. What a life, indeed.

This is a busy world functioning in secret, unbeknown to mortals, because half-bloods and pure-bloods are actually descendants of the Greek gods. That’s right, YOU HEARD ME PEOPLE. This book is loosely connected to Greek mythology and it’s fabulous. But the main clinch of the story is that, a) halfs and pures cannot ever be together or DIE DIE DIE, and, b) Alex needs to get in shape or become a brain-washed slave to the pures (literally). Yikes.

But Back to Greek Mythology

So this is the overarching ‘theme’ of the book – and it is pretty important. The Covenant (the school) is basically a religious institute who haven’t been in contact with the Gods for a while. Zeus and the crew are spoken of as though they’ll zealously smite any wrong-doing … blood ….? Actually I have no idea what the collective term for half/pure bloods is, but those guys. It was probably mentioned but I kept getting distracted by Aiden’s face . . . ahem. I think it might be the Hematoi.

It would seem, for the most part, that other than serving the purpose of explaining their slightly-better-than-humans abilities, the gods aren’t getting involved in the story. But there are still a few books in the series yet and an interesting plot development in the wings . . .

One of the great things about this book that really helped the pages turn was the way the plot developed through Alex’s training and her incredible hard work to achieve her goals. Seeing as she’s quite behind school with running away and all, means she has to have extra lessons whilst everyone else is on holidays (if their family likes them) so that she’s up to date for the beginning of the next school term. Most people seem to look upon her a little unfavourably because she’s a bit of a rough gal who does what she wants and screw the rest. There’s some seriously big parties that she frequently sneaks out to and some wonderful run ins with our two dashing leading men.

Everything that she has to learn in these extra lessons was awesome – she works her butt off and is bruised all over at the end of each day. Not to mention that hunker of a book she borrows from Aiden to brush up on some history – I’d really like to know what else is in that book, it seems to house quite a few interesting tidbits about this world. The little glimpses of the power/magic that the pures hold had me super intrigued and I really want to see more of this in book two. Despite so much seeming to happen the ‘setting’ of this book doesn’t progress much – hear me out. Throughout the duration of this book no-one returns to classes and everything seems to happen both slow and fast. Alex is a bit in-between with her comings and goings and seems really dedicated to her task on one hand but then keeps getting distracted with boys, parties, and spontaneous daimon attacks on the other. In this sense the plot was a little stagnant and felt like one big long backstory to the Hematoi-Daimon conflict. Not that it matters, everything was still amazing.

There were a bunch of concerning and disastrous daimon attacks that happen near the school campus throughout as well. I was shocked with the brutality of them and how many characters we lose along the way – I was not expecting this book to be so gasp-y. But with the ‘serious’ topic at hand the baddies are really quite dark and OH GOSH THAT PLOT TWIST. So let’s have a quick spoiler-y discussion: 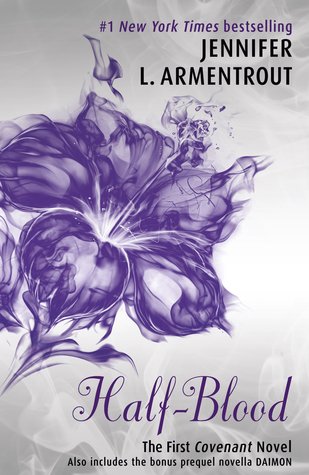 I get the feelings that page turning sexual tension in a common element to Armentrout’s book. If so, then this is no exception. It’s pretty obvious form the get-go that there’s no way there’d be zero blushing between this student-instructor relationship. And I don’t blame Alex. If I had Adrian as an instructor then lord help me, I wouldn’t get any work done.

She knows it’s forbidden (as in she’d be killed for getting involved with a pure) but when you’re susceptible to level 10 jelly legs around a boy, what can you do? Aiden is obviously a pure, he’s also very almost the brooding male troupe that plagues YA (okay – he totally is) but he laughed enough and had logical reasons enough for me to call him tough and inspiring instead. It was very reminiscent to me of a Tris-Four type relationship, mhhhhhmmm, *waggles eyebrows*. Imagine every highly charged moment with Theo James’ face all over the screen – YOU GOT IT.

The book is mostly focused on action and justice (*cough*hotheaded-revenge*cough*) however, so the romance isn’t in your face or hogging the plot. It was just perfect. I feel like I haven’t read one of those romances for awhile that are just good and develop with just the right amount of accidental eye-contact, charged arm brushing, and practice combat that suddenly becomes not just practice combat anymore. Thank you, Armentrout.

I just want to quickly mention Seth without giving anything away for you strange people who haven’t read this yet.

I was really torn about Seth’s character. I kind of expected him to be the bad guy – or at least very similar to Markus and Lucien. Instead, I’m sort of stumped as the what he’s truly like, does he actually have Alex’s best interest in mind? Or was that all an act? I have no idea. The only thing I’m certain of it that I’m 100% #TeamAiden and 60% concerned that I’m going to end up #TeamSeth by the end of book two. I just don’t know, I want to hate Seth. MY MIND IS CONFUSED AND ANNOYED AT THE SAME TIME.

This book was flat out wicked start to finish. I enjoyed every minute of it and particularly those featuring Aiden. Alex was a really cool character and wonderfully rebellious. I highly recommend reading this book – Aiden aside, it was just so much fun! I really enjoyed this book and I loved the characters, I’m still a bit so-so with Seth and I do wish a little bit more had happened with the plot but it’s a series, WE’RE GONNA BE OKAY. I will be ordering book two, Pure, as SOON as I can and I’m anticipating amazing plot twists and sizzling romances galore – bring it on, Armentrout.

For those of you who’ve read this book – check out the prequel that explains how Alex and her mum got into this mess: see my review of Daimon [#0.5]

Have you read Half-Blood – what did you think?
Which Armentrout series should I read next? 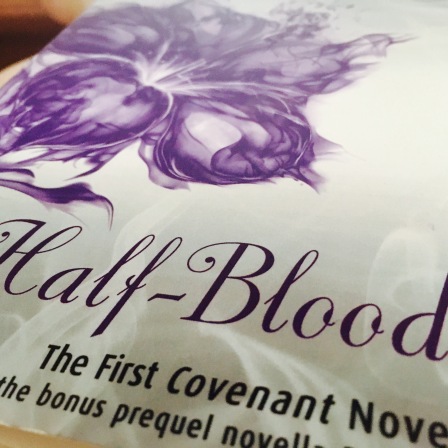 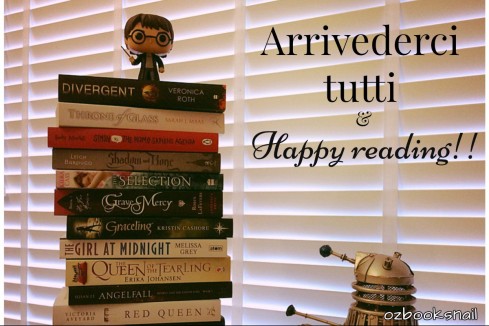 3 thoughts on “Triangulating Love in Half-Blood”