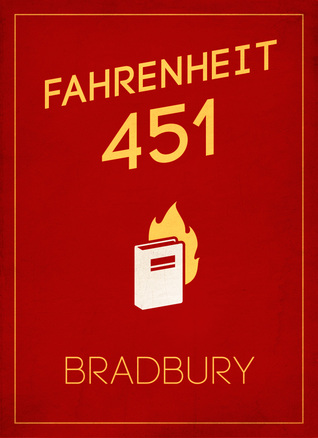 — You have no idea how much trouble the spelling of this word has caused me. I’m so glad Australia goes by Celsius. —

Um. Well . . . it wasn’t great. I was so excited to read this book – I placed my reservation at the library, got an audiobook, thought yeah! Now I can be one of the cool kids that listens to these things . . . hated it . . . .returned the audiobook . . . got out a proper book . . . and yeah. It was a bit like flat lemonade. Yup. Flat lemonade is probably the best way I can describe Fahrenheit 451 to you. Sorry.

“Stuff your eyes with wonder, he said, live as if you’d drop dead in ten seconds. See the world. It’s more fantastic than any dream made or paid for in factories.”

I actually originally rated this higher, at 3.5 stars, but I just didn’t enjoy it that much. I can’t quite bring myself to give it two stars because there are certainly some very interesting aspects of this book, so 2.5 it is.

It’s a weird classic with a pretty cover
Actually weird is just the tip of the iceberg with this one – I’m so glad I didn’t have to study this at school because I really don’t think I would have had any idea what was going on. Okay, so maybe the awkwardness of a man narrating Mildred’s voice in a cringe-fashion tainted my experience – but I won’t be reading this book again. In fact, the most exciting thing about this story was the story of how the actual book was made – as in Bradbury’s physical writing of the book. It was a disappointing read – it promised many things and then I didn’t like it. Damn. Anyway, anyway.

This book is set in the post-literate future where reading and books are strictly banned and firemen are not the type as you’d imagine today. They actually are the ones that go around starting the fires. They burn things. Which in itself is pretty damn creepy.

There’s a man called Guy Montag, and he gets a bit confused. He meets this younger girl whose family is clearly anti all this modern anti-book stuff and she fills Montag’s mind with, well, thoughts. Basically, shit hits the fan from that point onwards. We follow Montag’s story as it haphazardly jumps from one distraction to another whilst he tries to work out what is so horribly wrong about books and actually finds poetry appealing – clearly there’s something off about the guy.

I won’t tell you anymore about the plot of the book because if you so endeavour to read it (as you probably will if you’re here) then you’ll find this out for yourself. And I wish you all the best of luck – I was thoroughly confused.

[I do feel like this is the time to jump in and say: there’s probably a high chance you will enjoy this book. I genuinely feel that I could have loved its weirdness if I hadn’t started with the audiobook. Just bare that in mind.]

Yucky characters and awkward stitches
I didn’t like a single one of the characters in this book. Montag doesn’t know what he wants, can’t remember when he met his wife, and seems to be hyper-anxious about everything (which, in all fairness, is probably because of the society he lives in). Okay, maybe I’m being a little harsh – he is trying to break out of the oppression of his world and find a true friend, and I suppose he does somewhat regret he poor relationship with his wife. I just didn’t really like it. I feel like I really ought to have liked this book – it’s a bit like reading Pride & Prejudice in a way. One does not simply dislike such books. Perhaps it was simply the lack of dragons.

I really hated Mildred. She was so obsessed about the ‘family’ (which I didn’t really understand until I was well into the book) and wanted nothing to do with real life. She clearly didn’t actually love Montag and it was a bit awkward about her death – no one seemed to care, but I suppose it’s not hard to see why (sorry non-spoilery people). I disliked all of the firemen and the only character I thought I could maybe like was the girl that Montag met, Clarisse (the one that makes him think). And if I’m being entirely honest with you, it’s because she reminds me of Luna Lovegood. What can I say? I really think the audiobook ruined her for me – I think I genuinely would have enjoyed her character otherwise.

In all fairness. . .
I know I’m being harsh on this book. I don’t really know how well it’s received by people generally speaking but I feel like it should have been enjoyed more than I did. I cannot express enough how much I would recommend not listening to the audiobook -just read the book itself, it’s pretty short and easy to read. I think I could almost do with a re-read but I have zero inspiration to do so because my experience this time around was just so dreadful.

I do think that this book has a lot of say about contemporary society though. I may not have enjoyed it, but I think it understood it’s general message enough. It really makes you thing about people’s obsession with their own lives, with television, and with mindless gossip. It’s not hard to believe this as a plausible future (god forbid!) where a great war and extreme poverty hardly even factor for the average wealthy citizen. And it’s certainly not hard to see how there could be a troop of people who still exist undercover that cling to the memory of books and memorise certain pieces of literature. There is very much so a bittersweet taste to that.

“If you hide your ignorance, no one will hit you and you’ll never learn.”

Summary
Every famous book is famous for a reason – and this one is very, extremely unique. I’ve never read anything like it and it’s such a weird and backwards way of presenting this issue to readers that actually has quite a powerful result. I want to say that I wouldn’t recommend reading this, but I think – upon serious reflection – maybe I would, for certain people. It’s a very quick read so it’s not hard to get through. However, in the end I did not enjoy this book and that I blame upon a bad reading experience. This is definitely flat lemonade: disappointing and sort of ew, but it also still sort of tastes nice. I think I’ll stick to dragons and fantasy for a little while now . . .

What did you think of this book? Did you enjoy it? Or did you struggle like I did? Love to hear your thoughts below!