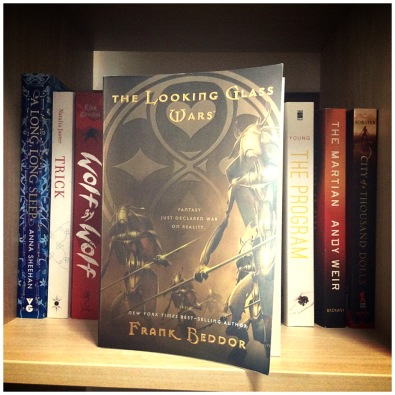 Fantabulous Wonderland adventures fit only for the mad

I absolutely adore Alice in Wonderland retellings and I don’t know why. The books are by no means amongst my all-time favourites and the Disney adaptation is my least favourite of the all the Disneys. I think what makes the retellings of the story so exciting is the extreme level of imagination required to put together such a story. There’s so much fun to be had by twisting Carroll’s story in every way possible and perhaps it is the wickedly fun adventures that are born from this that make me love it so much. Beddor’s work here is a fantastic embodiment of how to do a retelling right.

The Looking Glass Wars is the story of Alyss (=Alice) who is a young girl and princess in Wonderland where imagination acts as magic and she can create and alter things just by thinking it. She’s highly talented and a little madam. At the beginning of the book she is somewhat out of control and incredibly self-centred, but then, her evil Aunt Red wants to take back the ‘Queendom’ that is rightfully hers (which, technically it is, but when she was a kid the crown sort of skipped her because she’s psychotic and sadistic . . . ). After her home is attacked, Alyss finds herself in the human world with her guardian, Hatter Madigan, but they’re quickly separated and Alyss has to fend for herself. No-one believes her stories about Wonderland and she doesn’t know how to get back, no matter how many puddles she jumps in. And so her struggles begin.

There are, obviously, a multitude of things that I loved about this book, but I’ll try and not turn this into an essay.

Firstly, I thought the way the looking glasses worked was awesome. People can travel via looking glasses (otherwise known as mirrors) to quickly get to destinations. It does require a bit of skill to do so, lest one gets lost and dies (or something). It was such a fitting mode of transport because it only made 80% sense, leaving 20% of oh-lets-just-go-with-it.

The other more drastic ‘transportation’ mode was the Pool of Tears. I LOVED THIS. Ahem. This was almost like a river and if you jumped into it you were sucked under and then suddenly spat out into the human dimension. Apparently, no-one has ever returned back to Wonderland after doing so. Oh, oh, and it’s called the Pool of Tears because it’s supposedly made up of people’s tears. Cool, huh?

There were numerous other clever twists on aspects of the original story. The caterpillars, for one, were somewhat similar but had a less crazy and frustratingly whimsical demeanour to them. They were much more mysterious and just the right amount of creepy. They act as a sort of oracle in this world.

The card soldiers were another cool contraption, so to speak. They’re actually what you can see on the cover of the book. I’ll give you a minute here to all scroll back up and go ‘oooh’ and ‘aaaah’ at the cover now . . . . . . Done? Good. Also, at the beginning of the book Beddor has ever so kindly given us a wonderful visual demonstration as to how they assemble from harmless cards to full scale, insect-looking, arms-wielding, scary-looking knights. I approve.

Speaking of the cover, isn’t it great?! I love how sophisticated it looks with its dark tones and golden highlights. I’ll be hugely disappointed if book 2 isn’t as nice in person. Because YES, there is a book 2! *triumphant trumpets sound in the distance*.

Alyss is the main character of the book (duh) but she’s not the only perspective that it’s told through. She’s a pretty interesting character throughout and makes a couple of quite dramatic character arcs.

In the beginning she’s a frustrating little child who is incapable of understanding how to actually be nice to people and how to behave. She mellows out somewhat upon getting stuck in the human world as everything is no longer about her. I won’t go into the next two changes as I’d end up spoiling things, but she does change a lot throughout her journey, which does make sense for the most part. It’s towards the end when I realised how transformed she was that I questioned whether that was realistic (she says, talking about a book set in Wonderland). Overall, she becomes quite a likeable character and good candidate to fill Alice’s shoes . . . or just borrow them for a spin.

I’m still not sure if Dodge actually has a classical character equivalent but he was an intriguing character nonetheless. I’d believed that he was going to be the main love interest for the book as he’s Alyss’ best friend, but he too changes a lot in the book and I’m actually not sure how I feel about him at the end. I think there’ll be some big things regarding him in book two.

I just want to take a second to appreciate how great this character’s name is. Well done, Beddor, excellent form. Hatter was definitely my favourite character in this book and I loved how different he was from the Mad Hatter. He’s incredibly serious and a sort of military genius (seriously, those fighting scenes, *claps*). There’s clearly a secret and more sensitive past to him that we’re yet to discover. He’s so dedicated to keeping Alyss safe which was adorable. He’s also got some seriously cool moves with his hat. I can’t wait to read more of him in the next book!

Red is our good ol’ baddie. She’s pure evil and not afraid to kill pretty much any character who crosses her. She’s a great villain and a perfect level of crazy. I can’t wait for Alyss to win back her throne, as I hope she will, because Red is completely ruining Wonderland. She’s also on the cover of the next book so clearly we can expect big things.

Overall, the book is an awesome work of fantasy with a lot of tragedy worked within its pages. I thoroughly enjoyed it and it was a very quick and highly addictive read. It was certainly crazy enough to live up to its title as a retelling of Alice in Wonderland. So much about this book felt intensely magical and unique and I loved it all! I cannot wait to read the next book! If you’re looking for something original with a great amount of imagination put into its creation then this is 100% for you – it’s thoroughly enjoyable to read and I highly recommend that you do!

If you enjoyed this book then I HIGHLY recommend you check out the Splintered trilogy by A. G. Howard, it’s great!

Is there anything in books that makes it an insta-buy for you?

3 thoughts on “Falling for Wonderland in The Looking Glass Wars”

Q. What is your favourite SJM book? Mine is A Court of Mist and Fury! I'm about 80 pages into ACOSF and it's really good, so maybe this will take over! I so want to sit down and just lose myself to this world, but I haven't had the time yet! Life is so inconvenient sometimes - can't we just read 24/7?!
#reppost ✨ Q. What book had the STEAMIEST scene in it that you've ever read? Sarah J Mass sure can write them and this stunning scrunchie from @devoured_pages_booksleeves is called Chapter 55 - if you know, you know. Hint hint: paints.
Q. What was your favourite book in February? Mine was Daughter of the Siren Queen!
💞 Hello March! 💞 I hope you're all ready to bring on another month of reading! 📖 March marks the start of my ambassador term with @madeby.nikola so get excited and get using BOOKSNAIL10 to save 10% on your orders 🎊
Q. What are you currently reading? 🤗 Last day of the month so I'm definitely feeling that pressure to finish a book 😅
#reppost ✨ Q. How many booksleeves do you have?! I think I have about 10 by now! Quite modest in the grand scheme of things 🙏🏻
Q. Who's your favourite out of Ash and Puck in the Iron Fae series?? I have always been a solid TEAM ASH. He'll always hold a special place in my heart ♥️
Q. Who's your favourite enemies to lovers duo? If you haven't seen my TBR video yet then head over to the link in my bio to watch! Because, spoiler alert, I FINALLY pulled this bad boy out of my TBR jar! So exciting to be reading this in March 📖😍
#reppost ✨ Q. What book are you OBSESSED with? For me, Daughter of the Pirate King duology. Hands down. Will not stop talking about it. Riden is life. Alosa is my everything. Will die for these characters ☠️
Q. Tell me about a book you found slow to start? It took me a good month to get really hooked into Six of Crows! I loved it, but it was definitely a slow start for me!
Q. Which author would you read all of their books? For me, Colleen Hoover is my pick! I've slowly been getting through more and more of her books and this year am hoping to read aaaallll of her books (well, as many as I can, she has many). November 9 will be next up 👀
#reppost ✨ How good is my February blind date! Can you guess it?! Swipe to see! And keep swiping to see the adorable magnetic bookmark I got this month 😍
Q. Who's your favourite character in the ACOTAR world? I've always had a soft spot for Lucien, no idea why, but he's my fav 😍
Q. Are you an Outlander fan? I'm loving these exclusive candles from @madeby.nikola - they're so delicious! And it's so exciting to finally have a Jamie and Claire candle 😍 get excited for March to roll around as I'll be back on the @madeby.nikola team and will have a cheaky discount to share 🤫
🚫 GIVEAWAY CLOSED 🚫
Q. What are you reading right now? Let me guess, is it A Court of Silver Flames? That's what I'm reading! So exciting to finally have that book in our hands.
Q. If you got stranded on an island with a small group of people, what skills would you bring to the team for survival?
Q. What book are you excited to read next? Game Changer is my pick 😝 hoping to get to this THIS week, and then I'm sure I won't stop talking about it 😂
Q. What 2021 release are you most looking forward to?? There are so many good books coming out but one I'm looking forward to is The Gilded Ones!
Q. What's an underrated book you love? I loved the Wings series which I read YEARS ago! It'd such a great faerie story that I don't see enough people talking about!